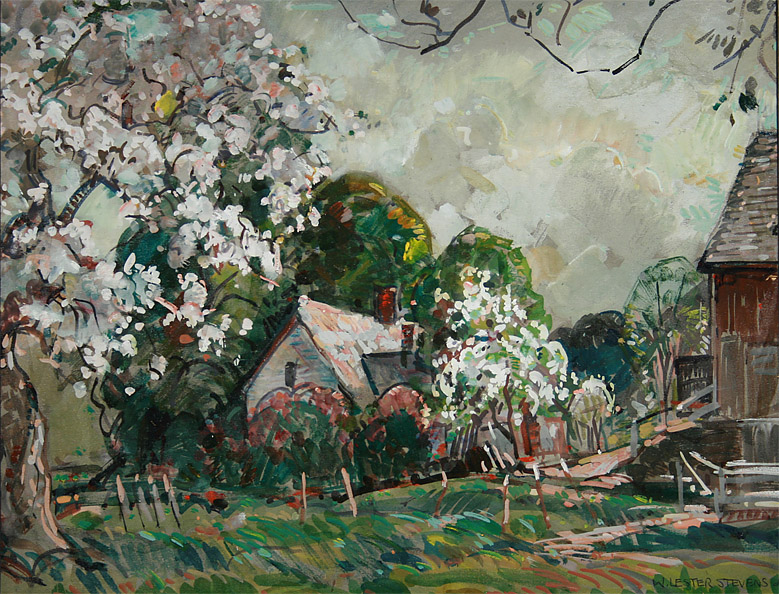 "SPRING BLOOMS ON THE FARM"

Housed in a 22k Custom Giltwood Frame, Beneath Museum Glass

William Lester Stevens was the youngest member to exhibit in New York’s National Academy, with 5 paintings accepted at

age 18, in 1906.  Stevens was born in Rockport, Massachusetts, and is considered one of Cape Anne’s leading painters.  He

was compulsive about painting outdoors daily, often tying his easels down with rocks on windy days.  He was prolific, producing

over 5000 paintings during his lifetime, and receiving more awards than any other living artist of the era.  He also taught at Princeton

His bold brushwork, loaded with color, and often with black-outlined subject matter, depicted the farms, quarries, and fishing

industry of Cape Anne, as well as North Carolina, where he worked shortly.  The presented work embodies the best of Stevens’

strong compositions and coloration, with the usual slashing directional brush strokes.  Its life under glass makes the condition

Stevens is represented in 15 museums, including The Smithsonian.  He has been the subject of one monograph in book form

Comments: He left Rockport in 1934 for western Massachusetts, settling in Conway in 1944. Nicknamed "Steve," he was

considered eccentric, and compulsive about painting outdoors every day. He produced about 5,000 paintings. After a summer

painting on Monhegan, he said "I’ve done 60 and got 6 good ones!" His early works have a heavy impasto in oil while his later

works are often of light washes in acrylic on Masonite. He taught for short periods at Boston University and Princeton, but held

frequent classes at his Conway studio as well as in Washington, DC and at the Springfield Museum of Fine Arts. He took his students to

This biography is drawn from the "Who Was Who in American Art" , the reference book on the cultural life in the United States.

The Hickory Museum of Art