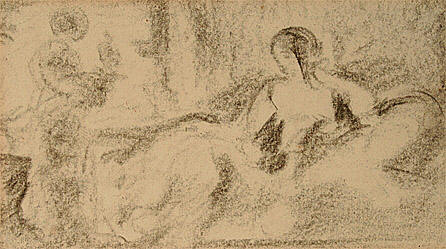 (In the Odalisque manner)

Narcisse Virgile Diaz de la Peña was the leading painter of the Barbizon landscape school. Among his favorite

and Near Eastern paintings of Eugene Delacroix.  The Odalisque is a subject matter throughout the 19th and early 20th

painting an Odalisque, to Manet's Olympia (1863).  Even Picasso painted his own Odalisque in 1951.  In a sense, this small

untitled drawing seems something of a mirror to Olympia, the reclining female accompanied by a servant, holding possibly a

small turbaned child -- or flowers -- although it was executed some years earlier than Olympia.  De la Peña's interpretation is

quite sensual, although retaining a delicacy and mystery not found in some of the other more provocative Odalisque depictions.

It is interesting to note that his romantic Near Eastern images came from his imagination, as he lost a leg to snake-bite at age 13,

and was unable to travel. 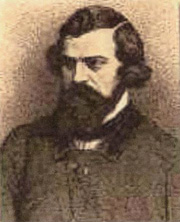 Narcisse Virgile Diaz de la Peña was the leading painter of the Barbizon landscape school. The son of Spanish parents,

who had fled the Peninsular Wars, he grew up in foster care at Meudon after their early deaths. At thirteen, an infection

caused by an insect sting or snake bite, necessitated the amputation of his left leg. In 1823, he began an apprenticeship in

painting on porcelain at a china factory in Paris, where he met Jules Dupré (1811-1889), who became his lifelong friend.  In the

late 1820's he was briefly tutored by the history painter François Souchon (1787-1857), copying the masters at the Louvre and

supporting himself by the sale of his own small paintings. He was further inspired by the poetry of Victor Hugo and the Near Eastern

themes painted by Eugene Delacroix. As he was unable to travel, these jewel-like images were the products of his imagination.

From about 1833, he began to explore the forest of Fontainebleau, becoming a regular summer visitor in the following years.

There he prolifically painted small studies of the forest with the same speed and fluency as his earlier floral and romantic idylls.

He formed a close association with Théodore Rousseau (1812-1867), and the other landscape painters of what became

known as the Barbizon School.  Awarded a first-class medal at the Salon of 1848, he was appointed chevalier of the Legion of

Honor in 1851. His paintings commanded higher prices than those of Corot, Rousseau, or Millet, although the critics were

reserved in their judgment of his work, admiring its "colorism" while considering it rather superficial. After 1859 Diaz

and Alfred Sisley (1839-1899) - encountered in the forest of Fontainebleau in 1864, received his warm encouragement. At Etretat,

where he summered in 1869, he painted seascapes in the company of Gustave Courbet. During the Franco-Prussian War of