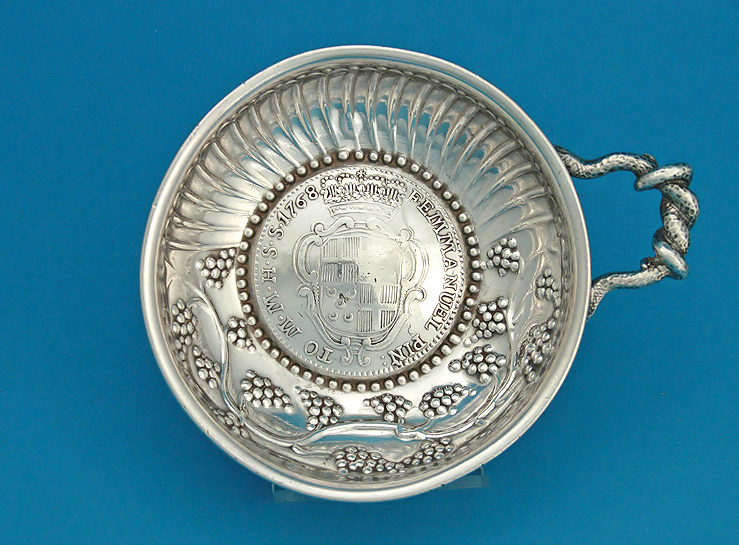 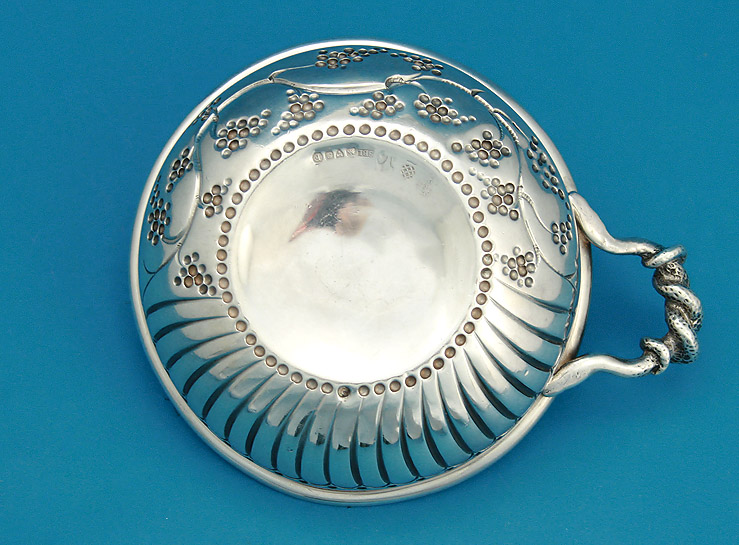 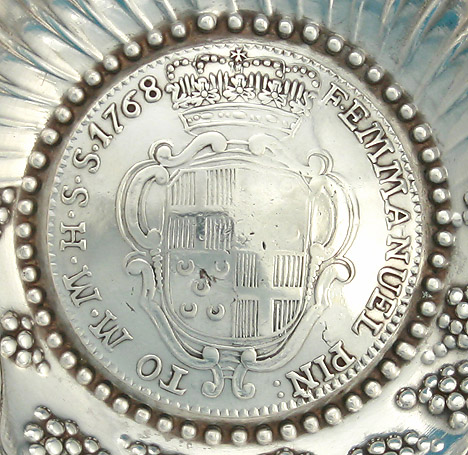 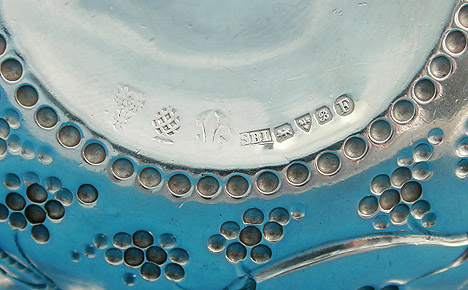 the coin surrounded by beading, one bowl side with beads and flutes, the other with a fruiting grape vine, 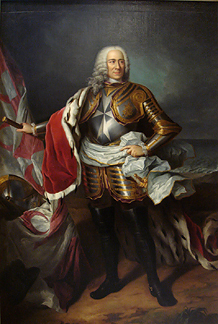 Grand Master of the Order of the Holy Religion of the Knights of St John of Jerusalem, of Palestine, of Rhodes, and called Malta,

from 1741 to 1773. He was a Portuguese Nobleman, the son of Miguel ?lvaro Pinto da Fonseca, Alcaide-M?r de Ranhados,

(Citt? Pinto). In 1749, one of his bodyguards, Cassar, refused to join a plot led by Pasha Mustafa to stage a Muslim slave revolt.

This refusal led to the exposure and suppression of the revolt. This event was then celebrated on every anniversary, 29 June.

Pinto created several new noble titles, which was greatly resented by some of the older nobles of Malta and gained a reputation

for imposing heavy taxes. He expelled the Jesuits from Malta. He completed the Auberge de Castille, one of the most important

buildings in the capital city, Valletta, which had been started in 1574 and his bust and arms adorn its fa?ade. Today this building

houses the Office of the Prime Minister.  He made substantial donations to the Conventual Church, and of the most notable

mementos worth mentioning are two large and heavy bells cast by the Master Founder of the Order of St. John, Aloisio Bouchut

in 1747 and 48 respectively which still hang in the belfries of the Co-Cathedral. Pinto built several storehouses on the Marina,

which still bear his name. When he died his body was laid to rest in a monument with a mosaic portrayal of him.

This is a major tourist attraction in Malta.

He was a friend of legendary Cagliostro.

*His coat of arms portrays five red crescents symbolizing that he once defeated five Ottoman Turks single-handedly. The city of Qormi

adopted this as its own coat of arms and flag. Actually, those are the Arms of the Pinto family with the enamels exchanged.

The Pinto family is probably the oldest family in Portugal.

daughter of Francisco Vaz Pinto (his father's brother) by one Clara Cerqueira.

From c1850-1900, copies of old silver, and items designed in an amalgamation of historic styles, were in fashion.

Many firms in Europe and in the United States produced this type of silver. Usually the recognition of reproduction

silver is not problematic, as it is marked according to the laws of the country of origin.   However, the antique silver

marked. It is unclear is the intent was decorative or to deceive.  The spurious marks somewhat resemble old marks,

and are appropriate to the style of the piece – i.e. French rococo style reproductions marked with French looking marks,

and 18th century maker's marks.  This type of mark stamping practiced in Hanau would have been illegal in France,

England, or German cities where a guild supervised the marking – as the various assay offices in the UK.  Hanau,

however, had a long tradition as a “free-trade city”.

With the production of "antique silver", Hanau found a market niche, which brought its silver manufacturers enormous

prosperity and worldwide reputation. The 'father' of this industry was August Schleissner. The other leading firm of Hanau

was Neresheimer, founded in 1890 as a partnership of August and Ludwig Neresheimer with Jean Schlingloff. Right from

the start Neresheimer offered a wide range of highly decorative objects like nefs, tankards, coconut and nautilus cups, and

Sterling (925/1000) was rarely used – usually on pieces made for export to Britain and the United States.